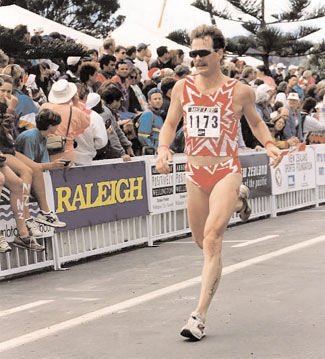 INTRODUCTION
In the summer of 2003, I taught a few yoga sessions in a small town in mid-western Ontario, Markdale. It was a hatha style of yoga class. Yoga was a new experience for most of the participants. Students ranged in age and were mostly female. Graeme saw my posted flyer and e-mailed me to enquire about the classes. He gave me a bit of his history. I told him about my Yoga for Runners work and invited him to attend the next class. He came to a number of the classes and then I prepared a custom yoga program for him. Since that time, he has continued to practice on his own and I have continued to coach him on his yoga practice.

Graeme is planning to complete Ironman in Florida in November 2004. These pages will document his training experience, focusing on how he integrates yoga into his regular training and documenting the shifts and changes he feels in his body.

BACKGROUND
What sort of activities were you involved in as a child? I was always a pretty active child. I grew up loving the outdoors and was involved in activities like canoeing, hiking, soccer and hockey.

When did you start running?
I was 21 years old,a student at Queens University and my initial interest in running was to offset the beer I drank – I think I drank a beer for every mile I ran. A few years later, I was at medical school at McGill and I took up running to offset the gruelling and rigorous pace of med school. I found running to be a zen activity that helped balance the rest of my crazy schedule. Within a year, I ran my first marathon – Ottawa in just under 3 hours. That was in 1978.

How was the experience?
Actually, it was a pretty painful experience. I wore my green Asics Jay Hawk shoes and I recall that water was only available at the first-aid stations. But. I loved it and knew I wanted more of it. So in the next few years I ran a few more marathons and brought my time down little by little. In 1980 I ran the Marine Corp Marathon in Washington and came in at 2:31.

Did you do any stretching during this time?
NO!

Subsequent running history?
In the early 80’s I was a resident in family medicine and working 12 hour shifts. I would bike to and from the hospital and kept up my mileage as best I could. My goal was to break 2:30 and in 1981 I ran Ottawa again..this time in 2:26. When I completed medical school, I took a year off primarily to run. I just loved to run and wanted to focus my energy on it. So in 1983 I joined the Toronto Olympic Club. I ran about 200 km per week and did a lot of anaerobic threshold running. In the next few years, my training became more intense and I hit my peak in 1985 when I ran Ottawa again, this time at 2:25.

How was your body holding up?
With my 1985 marathon, I had pretty well reached my peak. I was running about a 32 minute 10 km. By this time I was doing a little bit of stretching but no cross training. Up to this point, I had no injuries to speak of. In 1986 I experienced my first serious running injury. I ran Houston and had a poor time. I was experiencing a weird anterior pelvic pain. It grew progressively worse until it became painful to walk. This was a fairly serious injury and forced me to turn my training to the bike and the pool. It was at this point I felt my body was starting to respond to the years of serious training and knew I couldn’t continue with the same intensity in running. So, I continued to cross train with swimming and cycling on a regular basis. In 1988 I completed my first triathlon. That same year I also ran my first ultramarathon – 50 miles in 5:36.

How did triathlon training affect your running?
Generally, with the cross training I felt more balanced and less injury prone. I felt that most of the injuries I did sustain were related to the running. The effects of 15 marathons, 1 Ironman and 50 triathlons were making themselves evident in my body. When I was in my 20’s, my body could do it. The build up of years of training was definitely having an effect and I knew I couldn’t sustain the rigours of my past training without changing something.

How did you come to Yoga?
I knew enough about yoga and understood how it would help me. I had made many visits to a sports chiropractor and knew that my hips were tight and that led to inherent weakness in my hips and pelvis.

How did you feel coming to your first yoga class?
Well, I knew I’d be the only male in the class..but I’ve never minded being different. I knew I couldn’t move forward without stepping back. So, I approached it with a sense of humour. It was helpful to know your background work with runners and it gave me confidence to trust you.

How did you feel after your first yoga class?
I was quite skeptical that I could progress but I knew that I had to give it a try. Conceptually I had faith in the yoga process, I just didn’t know if I was too far gone for it to work on my body. On a psychological level, I wanted fast results, but I know that’s not how yoga works. I know that over time it will help. I want to be able to meet my triathlon goals so I feel that the potential benefits are big enough that my time spent on yoga will pay off.

How have you been fitting yoga into your schedule?
Since last October, I have been doing a little bit most days. Two or three times a week I do the full 40 minute program.

What changes have you noticed?
Within 1 month I noticed improvement in certain poses – I was either able to be in them longer or they felt better. The downward dog pose is such a good gauge of changes in my body and I can definitely feel that my heels are closer to the ground. Through yoga, many of my past injuries have been brought to the surface as they are working their way out of my body. I get frustrated from time to time because I’m not progressing as quickly as I would like. Nonetheless, my body feels better and more fluid. I’m not feeling the back discomfort I used to feel while cycling. My tolerance for holding the aero position has increased and I’ve lost some of the stiffness when coming off my bike after a long ride. I’m hoping this will translate to a smoother Brick experience in the triathlon. On a more practical level, I am able to get up and down from the floor much easier when playing with my kids.

What are your plans for going forward?
There is no doubt in my mind that I’m moving in the right direction. I’ve learned a lot. For example, I think my approach to yoga was a little too aggressive and I need to back-off and be a little more patient. I know that this is not a quick fix. Rather, it is part a long term lifestyle change.