Let me introduce myself, I’m Christine Felstead.  I came to yoga after a fulfilling career in administration and marketing.  Many public speaking opportunities both local and international – who knew these skills would be so helpful in a second career of teaching yoga.

In this world of yoga I feel like a real ‘oldster’, having completed my first training in 2001 at Downward Dog Yoga Studio in Toronto. It was the only studio offering Teacher Training at the time and only the second year they did so. It was a 2 year program – can you imagine that?? At the end of the training I had completed over 1000 study hours – and I still felt like I knew little.

I loved everything yoga and continued to study and practice while developing my teaching skills.  Previous to yoga I was a gym goer, fitness instructor (yeah Metro Central YMCA) and recreational runner. I was never a fast runner but built my endurance to run 2 marathons.  My favourite running distance was 10 miles. With some experience and integrating my running and yoga knowledge, in 2003 I started teaching yoga to runners.  This gave birth to Yoga for Runners and I’m delighted to say that through my YfR 8 week series, thousands of runners were introduced to yoga and became aware of how yoga could sustain and improve their running.  This was well before yoga became mainstream and many runners thought yoga was chanting and stretching.  When they saw the strengthening capacity and their aches and pains improve, they were turned on. 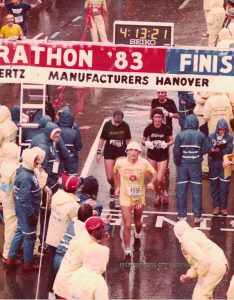 Two best selling DVDs (wow, seems like old technology now!!), an online educational series (more modern!), a book (they never get old) and a Teacher Training Program that attracts an international audience – productive years but most importantly I feel satisfied that most many runners have benefited.

As much as I love teaching I love being a student.  I have had the amazing privilege of studying with supreme yoga instructors (Richard Freeman; Ron Reid; Diane Bruni; Maty Ezraty; Mahyar Raz;  Nicki Doane; Eddie Modestini; Hart Lazer; David Robson – to name a few.  In 2005 a friend and I spent 3 days in Montreal practicing with Patabbhi Jois, the ashtanga yoga legend, in a cold gymnasium heated by the energy of 100+ people practicing together. 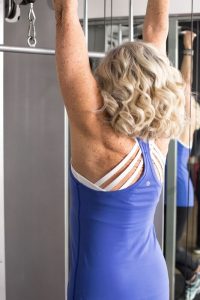 About a year and half ago my chronic shoulder injury led me to a strength training course led by Kathryn Bruniyoung and Cecily Milne.  My eyes and mind were starting to open.  Completing the  Functional Range Conditioning and the Yoga Detour training courses changed my teaching immensely. It also changed my practice to a less repetitive style, integrated strength work (back to the gym), understanding the difference between flexibility and mobility and making full body controlled joint movements (CARS) my morning routine.  I am excited to get on my mat every morning to see what the practice will bring and to develop an intuitive sense of what my body needs on a given day… and listening when it’s a self-care/restorative practice day.

When I train yoga teachers I encourage them to teach from their heart, their experience and to never stop learning.  I can say that I practice what I preach and my teaching has continuously evolved. Even more so in the past year as I have witnessed the effects of  repetitive yoga sequences in students’ bodies.  Some students don’t like it but many do and are seeing tremendous results.  Watch for future posts on this.

As I enter my 66th year, I wonder what future changes are in store.  I have faith that what worked in the past will work going forward – continue to study and continue to practice.