I have practiced yoga for several years. Everything from hot Hatha flow to slow and steady Prana restorative. I have also been a runner since high school. 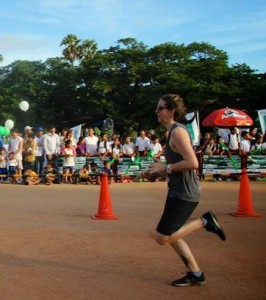 That’s why when I came across Christine’s Yoga for Runners classes, I was intrigued. Would yoga specifically designed for the aches and pains of runners be much different than the usual ebb and flow of my previous yoga experience?

Well, last week I set out to discover the truth for myself. Arriving at the Roots Yoga Studio for Christine’s regular Monday class, I was greeted by a wonderful mix of students. There was no one “type” of yoga for runner student. So, feeling nervous and excited, I settled into to the back of class trying to prepare my body for what was to come.

Christine began by welcoming her students to class. I noticed there were quite a few regulars that she knew by name, and later by their particular tight left hip or hamstring. However, the similarities of other yoga classes I have attended ended after the friendly greeting.

The rest of the class was work! Work that only a runner could truly appreciate. This particular class was focused on hips. We moved through series after series of poses that targeted the ever-tight-and-bothersome-runners-hip. Christine guided us through each move, tactically working out the sore muscles that runners have tightened, pulled and pushed to their limits while pounding the pavement.

The poses were targeted, as was something else, the energy in the room. Students in class were focused on strengthening and elongating the muscles that give them grief. Their intentions were not to flow through a series of light moves to extend their back or legs, they were committed to getting the deepest stretch possible in each pose. They are well aware that with concentrated attention on this practice, they would reap the benefits on their next run.

My particular favourite was lying over blocks, feet together and knees open to the side while the pelvis was supported with a strap. This allowed us to completely surrendered our hips to an intense stretch that I just could not get from other poses.

All the work for class and focus on areas that give runners trouble helps to ease back pain, give you a more agile stride and improve circulation in your legs. All important benefits for any runner!

The class ended in savasana to relax after a dedicated practice. As I was leaving the change room I heard lots of chatter on the ways practicing with Christine had improved students’ running game and I am not surprised!